Extendable Necks
Doublas M2(ダブラスM2 Daburasu M 2) is one of the first two Mechanical Beasts that appear in Episodes 1 and 2 of Mazinger Z.

Doublas M2 has a dark blue-colored body with a purple chest, feet, and pelvis. It has two, dinosaur-like heads, each connected to a long neck, where each one has pointed snouts with exposed teeth, orange-colored eyes, and two ears pointed downwards. It also has sharp claws on it’s hands, an exposed area on the abdomen holding six red dots, green finger tips, and big green spikes on it’s legs.

The Birth Of A Miraculous Robot

When an evil scientist, named Dr. Hell, decides to conquer the world with his army of Mechanical Beasts, he demonstrates to his lieutenant, Baron Ashura, that he can control them with his Staff of Bardos. After showing that he can control a Mechancial Beast, named Garada K7, Dr. Hell then takes control of a two-headed Mechanical Beast, named Doublas M2. Upon being controlled, Doublas M2 starts shooting lasers out of it’s two mouths at a pillar, destroying it. Dr. Hell commands it to stop, however, as Doublas M2’s rays could melt his entire palace in less than a minute. Despite having an army of Mechanical Beasts to conquer the world with, Dr. Hell shows concern over another scientist, named Dr. Kabuto, who is the only one who knows about the army. Baron Ashura is sent out to kill Dr. Kabuto and to acquire the photon energy and the Japanium he discovered to make the army of Mechanical Beasts invincible. Dr. Hell gives Baron Ashura his staff to take control of Doublas M2 and Garada K7 and to bring them to Japan within the Salude, a submarine fortress. Once Baron Ashura, and an army of Iron Masks, do manage to kill Dr. Kabuto, Dr. Hell instructs his lieutenant to destroy every city in Japan and to occupy the Photon Light Institute with Doublas M2 and Garada K7. The two Mechanical Beasts are unleashed from the Salude and start creating destruction in their paths where Doublas M2 uses it’s Mouth Rays to blow up the structures.

While Doublas M2 and Garada K7 are destroying the city, Dr. Hell discovers two giant robots, Mazinger Z and Aphrodite A, piloted by Dr. Kabuto’s grandson, Koji Kabuto, and Sayaka. Dr. Hell instructs Baron Ashura to get rid of them immediately, so the lieutenant commands Doublas M2 and Garada K7 to head to their location immediately, which is by the Photon Lab Institute. As the two Mechanical Beasts head to their destination, Doublas M2 uses it’s Mouth Rays to blow up structures along the way. Once the Institute is alerted of their presence, Koji and Sayaka head out within Mazinger Z and Aphrodite A. The two duos confront each other in the woods where Garada K7 uses it’s missiles and scythes against Mazinger Z and Doublas M2 uses it’s Mouth Rays to set Mazinger Z ablaze, knocking the super robot down. Sayaka tries to check on Koji with Aphrodite A but then gets targeted by the two Mechanical Beasts. Garada K7 stabs Aphrodite A in the back with one of it’s scythes when Sayaka tries to get it to run away and Doublas M2 fires it’s Mouth Rays at it. Doublas M2 then kicks Aphrodite A onto the ground to let Garada K7 kill Sayaka. Fortunately, Koji gets a hang onto Mazinger Z’s controls and saves Sayaka. The two Mechanical Beasts start to face against Mazinger Z where Koji discovers the super robot’s weapons and uses one of them to knock down Garada K7. Doublas M2 grabs a hold onto Mazinger Z and delivers a powerful shock from it’s abdomen. Garada K7 then gets back up and throws one of it’s scythes. Seeing the scythe coming, Koji gets Mazinger Z to position Doublas M2 at an angle and the scythe ends up slicing off one of the heads. With one of it’s heads sliced off, Doublas M2 backs away from Mazinger Z, allowing Koji to fire laser beams from Mazinger Z’s eyes and blowing up Doublas M2.

Abdomen Electrical Discharge: On an open area on the abdomen, Doublas M2 can discharge electricity when near it’s opponent to deliver a powerful shock. 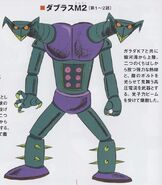